Today’s cinema adventure- Ralph Bakshi’s 1972 feature debut, his adaptation of R. Crumb’s underground comic, Fritz the Cat.  The first animated film to earn an “X” rating, it met with a lot of resistance and outrage from the mainstream, and Crumb hated it, disowned it, and tried to get his name taken off the credits- but it ended up being the most financially successful independent animated feature of all time.  Written and directed by Bakshi, the film follows Fritz as he takes a personal odyssey from a life of “hanging out” and looking for a good time through a drug-inspired pursuit of revolution- with plenty of shockingly permissive bad behavior along the way.  Voiced by Skip Hinnant (known for his work as part of the ensemble on the classic educational show, The Electric Company), Fritz is hardly a typical cartoon hero: far from cute, barely likeable, and nobody’s idea of a role model, he indulges in one ill-advised misadventure after another, motivated by selfish hedonism even when he is ostensibly acting for what he views as the greater good.  He serves as a sort of counter-cultural Candide, a naïve fool who fancies himself a sophisticate, and as such is at the mercy of a world more corrupt and complex than he imagines; in short, he is the kind of phony that the truly hip despise, and his journey of self-discovery in this worst-of-all-possible-worlds is a vehicle to expose social and political hypocrisy from every source, including (and especially) from our hero himself.  This ambitious agenda may have been beyond the scope of Crumb’s original work (he certainly thought is was), but for Bakshi, it was important for the film to make a statement, which it most certainly does- in between scenes of anthropomorphic animals having sex and taking drugs, that is.  Not that his intention was to shock: geared towards a drug-friendly youth culture, loaded with tons of juvenile sexual, political and racial humor, and mercilessly critical of both the radical left and the extremist right, the film is clearly aimed at an audience who shares his uncensored sensibilities.  At the time of its release, it was one of those films that generated protest and controversy from people who more than likely never saw it, and was cheerfully received by a target audience hungry for the kind of frank, turned-on content it offered.  Forty years later, most of its shock value and its topicality are long gone (one can see comparable content on any given episode of Family Guy today) and across the gap in time much of the film’s anarchic zeitgeist seems more than a little tiresome- as I suspect, to the more mature viewer, it did even then.  Still, as a piece of history, it is fascinating to watch: the animation, though primitive and almost quaint to modern eyes, was innovative and ground-breaking at the time; it presented adult subject matter and content never before seen in animation and completely changed the industry, breaking the stereotype of cartoons being only for children; and it vividly captures a particular social strata of 1960’s culture that is often ignored by popular memory.  I won’t say that you’ll enjoy it, but if you’re intrigued by looking through a window to a bygone era- and you’re open-minded and adventurous- you’ll be glad you watched it. 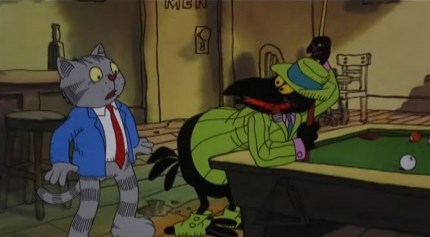 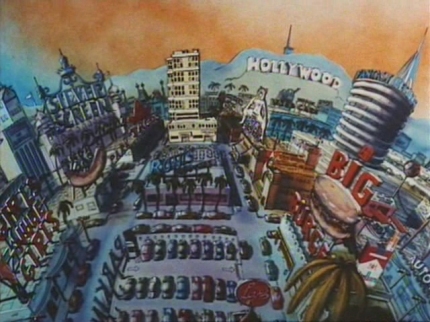