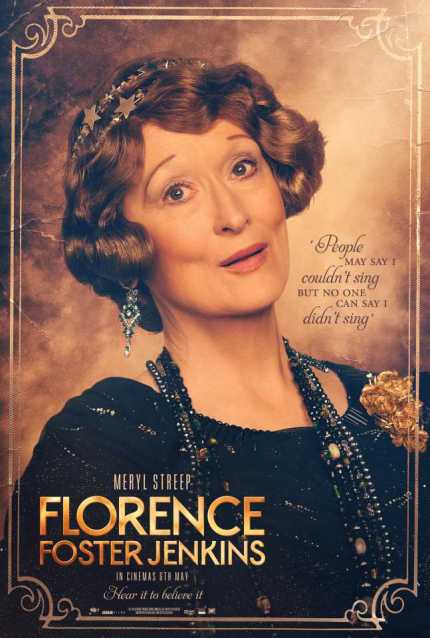 Walking into the theater to see “Florence Foster Jenkins,” it’s a given that you are about to watch another tour-de-force by Meryl Streep.  I’ll waste no time in saying that she delivers on that expectation.  The story of a real-life society matron who realized her life-long dream of singing at Carnegie Hall despite a complete inability to carry a tune, this bio-pic is tailor-made for her talents; it can be no surprise that she gives arguably her most delightful performance in years.

What’s surprising is that nobody sharing the screen with her disappears behind her shadow.  On the contrary, her co-stars contribute just as much as she does to the movie’s overall charm, helping it to become much more than just a showcase for the talents of a beloved silver-screen diva.

To give full credit, it is necessary to recognize that this is not just a Meryl Streep vehicle, but the latest entry on the resumé of British filmmaker Stephen Frears, who first gained international recognition with his iconic 1985 gay romance, “My Beautiful Laundrette,” and who has helmed a number of prominent movies over the decades since- “Dangerous Liaisons,” “The Grifters,” “The Queen,” and “Philomena,” to name only a few.

No stranger to working with legendary talent, one of Frears’ great strengths as a director is his ability to enlist them in the service of his own sure-and-steady storytelling skills, allowing them to be actors instead of stars, and to enhance his work instead of dominating it.  It’s an approach geared towards the character-driven projects he prefers; his movies, though they often involve unorthodox situations or famous figures, are always ultimately about universally-shared human experience, and they benefit from the workmanlike performances though which he guides his players.
In this case, of course, the incomparable Meryl is front-and-center, as she should be.  Her Florence has all the hallmarks of a great Streep role.  She is a larger-than-life personality, almost cartoonish, but in Streep’s hands she is never anything less than completely, believably human.  She displays impeccable comedic abilities in one moment and slips seamlessly into heartbreaking pathos the next, without ever relying on clownish mugging or heavy-handed sentiment- and on top of it all, she does her own bad singing without sounding like she’s trying to sing badly.  In short, she gives the kind of performance that has put her in the echelon of such stars as Hepburn and Davis.

Even so, she is not the whole show.  The movie’s real surprise is certainly Hugh Grant.  Usually regarded more as a personality with a pretty face than as a high-caliber actor, he more than rises to the occasion here as Florence’s devoted (if not-quite-faithful) husband, who uses his connections in both the high and low strata of New York society to help her accomplish her improbable dream.  Carrying himself with the slightly-obsequious swagger of a ne’er-do-well cad, he undercuts that demeanor with a layered performance which never leaves you in doubt of his sincerity.  His aging-but-still-handsome features convey a depth of feeling which reveals “Florence Foster Jenkins” to be, at its core, a love story.

In the third key role, Simon Helberg (of “The Big Bang Theory”) portrays Florence’s reluctant accompanist, Cosmé McMoon, in a style which (in keeping with the film’s period setting) suggests the codified “sissy” characters of old Hollywood.  His homosexuality is never explicitly addressed, but the film derives some good-natured humor from his obvious orientation- which, rather than demeaning or marginalizing him, serves to place him, along with all such characters, in his rightful role as an integral part of society.  Queerness aside, Helberg gives us a marvelous serio-comic turn as a timid outsider who finds the strength of his own spirit through his dedication to his unlikely employer; he fully earns the right to share the screen with his two co-stars.

The rest of the cast, though their names and faces are less recognizable, are equally effective in portraying their roles.  In addition, the film benefits from breathtaking production design (by Alan MacDonald) and sumptuous costuming (by Consolata Boyle).  Finally, as is always the case for a strong film, the screenplay (by Nicholas Martin) is well-crafted, literate, and thoughtful, providing a strong foundation upon which the other artists can build their own great work.

“Florence Foster Jenkins” is not a deep or ground-breaking piece of cinema.  It’s a refined crowd-pleaser, a serio-comic slice of life designed to touch and delight its audiences.  That’s not a bad thing.  In a summer filled with noisy blockbusters, it’s refreshing to be treated to a movie with such quiet class- particularly when it has as much talent on display as this one.  After all, when a Meryl Streep performance is just the icing on top, you know that has to be one delicious cake. 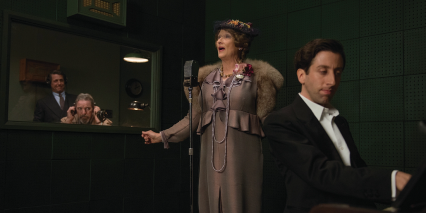 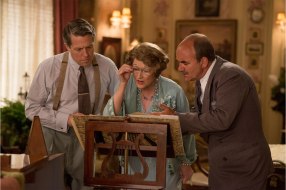 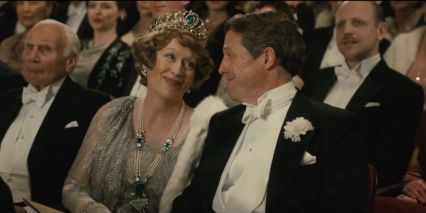