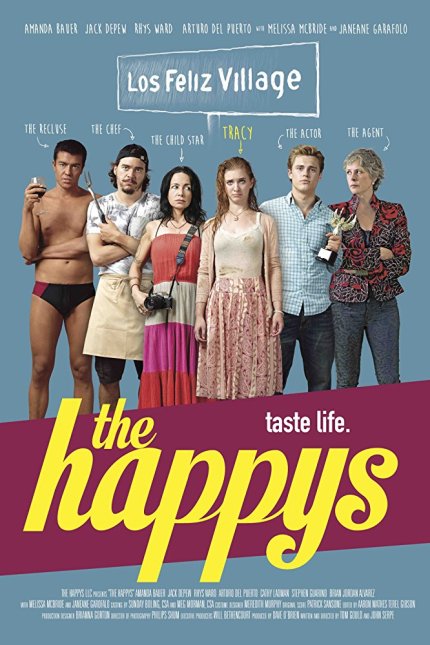 There’s no shortage of movies about fresh-faced out-of-towners coming to “the big city” to make all their dreams come true, only to have their naiveté stripped away by a few hard knocks from harsh reality.   In a substantial percentage of those movies, the big city in question is, of course, Hollywood.

With so many such films already out there, it’s undoubtedly hard for any filmmaker to come up with a new angle on the subject.  Typically, even the good ones are predictable.

Going into “The Happys,” a new film about a young Wisconsin girl who moves to L.A. with her high-school-sweetheart-turned-fiancé after he is cast in a major Hollywood film, one might expect the same familiar patterns to be played out yet again.

At first it seems like pretty standard stuff; but writer/directors Tom Gould and John Serpe throw us a new twist almost immediately, when Tracy (Amanda Bauer) comes home to the couple’s new Los Feliz rental and catches Mark (Jack DePew) having sex with another man.  The two decide to stay together – they are too enraptured by their happily-ever-after fantasy to let it go; but though this seems to go well, at first, Tracy grows restless.  She begins to explore the local culture, developing a fondness for food trucks and striking up an intriguing new friendship with a reclusive neighbor (Rhys Ward).  Meanwhile, Mark finds himself struggling not only to keep his repressed sexuality from jeopardizing his relationship, but also from derailing his career in homophobic Hollywood before it has even begun.

Such a set-up could go in a lot of different directions.  “The Happys” could have been anything from slapstick comedy to bleak tragedy, but Gould and Serpe have chosen a middle path, and it suits their film admirably.

Establishing its identity squarely from the beginning as a “dramedy” with a comfortably quirky indie flavor, it floats between seriousness and humor at about the same levels found in your average rom-com.  It honors the struggles of its flawed characters by taking them seriously and treating them with fairness and dignity, but it’s not afraid of poking a little fun at their foibles, also.

It pushes furthest towards the direction of outright parody in its treatment of the movie business (an establishment which serves, after all, as the story’s only real antagonist) – but here, too, it works hard to avoid passing judgment.  Even Mark’s brass-balls agent (Melissa McBride), who pushes him to stay in the closet and use his girlfriend as a beard, is depicted with relative sympathy; she is, after all, only another cog in the wheel of the Hollywood machine.

“The Happys,” for all its overtures towards satire, is less interested in ridiculing the status quo than it is in overcoming it.  It gives us stereotypes we think we know – the devoted girlfriend who defines herself through her relationship, the closeted pretty-boy terrified of being found out, the mysterious recluse with a secret and a heart of gold – and makes of them a little community, letting them discover more about themselves through their interactions with each other and the larger world.  In the process, it opens them up and allows us to see parts of ourselves in each one of them.

In this way it bears more than a passing resemblance, both in form and in spirit, to Armistead Maupin’s “Tales of the City.”  Just as that book does with San Francisco, it revels in its Los Feliz setting (the film’s title is a reference to it), making the neighborhood itself into a character and ensuring plenty of enjoyment for locals who will recognize many of the locations.  There’s even an eccentric landlady – a former child star played to perfection by Janeane Garofalo – who acts as a sort of den mother, passing on wisdom and neighborhood history to her little family of renters.

It carries a similar message, too.  Each of its characters starts their journey with an identity dictated by outside expectations and spends the rest of the movie learning to recognize and embrace who they really are.  As one of the film’s minor characters sums it up, “the closer you get to your true self, the happier you are.”  One can imagine Mrs. Madrigal saying those exact same words.

“The Happys” inhabits a more confined space than “Tales,” though, with fewer characters, a less sprawling landscape (both geographically and culturally), and a lot less time to win us over.  As a result, some of it feels a little hasty; revelations come too quickly, as do realizations and reconciliations, and some of the plot contrivances stretch the willing suspension of disbelief a little too far (an unknown newbie actor from the Midwest landing a lead in an A-list Hollywood movie is just the first of several implausible plot points).

Still, it’s a movie with a lot of heart, along with a worthy and much-needed agenda.  Gould and Serpe address the issue of homophobia without being preachy or confrontational, opting instead to treat it with kindness and candor.  Mark, though he may be callous and dishonest, is also broken and unhappy, and the fact that we are led to empathize with him and even root for him raises this movie above the level of the many less-sincere attempts to confront such characters onscreen.

Likewise, in Tracy, the movie gives us a strong female protagonist whose growth from subservient mouse to independent woman presents her at every stage as a likeable, understandable person – not just some caricature of femininity.

Both these characters work, despite the occasional elision of their arcs, thanks to their heartfelt performances.  Bauer, in particular, gives a strong performance, carrying the bulk of the movie on her shoulders and making it look good as she does so.  The whole cast, in fact, does nice work.  Garofalo is a treat, as is McBride; Arturo del Puerto brings good-natured charm (as well as a dash of diversity, something the movie could have done better at including) as Ricky, a flirtatious Latino food truck operator; and young out actor Brian Jordan Alvarez has some memorable scenes as one of Mark’s co-stars, contrasting his openly gay persona against DePew’s tightly guarded artiface.

There are times in Gould and Serpe’s film when one wants it to go further – to sharpen its satirical teeth and bite harder into the toxic hypocrisy of the Hollywood system or to shine a harsher light on the psychology of the closet; but that’s okay.

Thanks the sincerity and positivity of its intentions, it offers up so many sweet and life-affirming moments that it is easy to forgive it for not making a deeper dive.