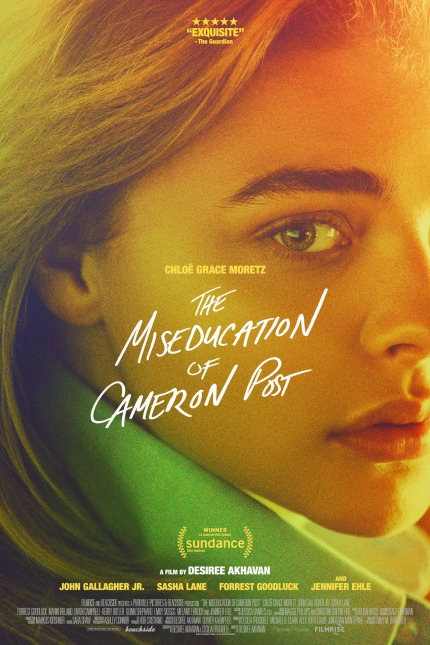 When Emily M. Danforth published “The Miseducation of Cameron Post” in 2012, it was a different world in many ways.

Inspired by the real-life story of Zach Stark, a 16-year-old blogger from Tennessee who shared on his MySpace page about being sent into gay conversion therapy by his parents, the young adult novel was a coming-of-age story about a young girl forced to attend a “faith-based” conversion camp.  At the time, it felt like part of a larger social movement towards awareness and acceptance of LGBTQ rights.

It’s painfully ironic that Desiree Akhavan’s new film adaptation of Danforth’s book finds itself coming, six years later, into a culture where opposition to the legitimacy of same-sex attraction – and the rights of those who feel it – has resurged into the social and political atmosphere with emphatic and frightening force.  In the current context, the release of such a film seems like radical activism.

Set in 1993, the movie stars Chloë Grace Moretz as Cameron, a teenager who lives with her conservative aunt after losing both parents in an automobile accident.  While attending her high school’s homecoming dance, she is caught making out with another girl in the back seat of a car.  She quickly finds herself being sent off to a remote “summer camp” in the Montana wilderness where residents are subjected to counseling designed to realign their sexual orientation.  Cooperative at first, she finds kindred spirits among the other teens and attempts to settle in for the duration; but as she becomes more aware of the psychological damage being inflicted on her fellow campers, she begins to realize that this ostensibly loving environment is in fact a dangerous fraud.

The film initially creates an almost comedic tone, allowing us a few sly chuckles over the excessively wholesome atmosphere of the camp and the obvious denial of its “ex-gay” counselors.  As the story progresses, however, the layers begin to peel back; we discover the dark toxicity lurking beneath the surface, and our bemusement gives way to outrage.  In this way, screenwriters Akhavan and Cecila Frugiuele follow the novel’s tactic of slow revelation to good advantage.

The screenplay does make a significant alteration from the source material, however; in Danforth’s book, Cameron is twelve, but the film boosts her age well into her teens.  While seeing a little girl subjected to the kind of brainwashing tactics portrayed here might have been a more potent indictment against conversion therapy, the added maturity does permit a deeper exploration of Cameron’s sexual feelings – which gives her plight a visceral urgency that might otherwise have been absent, and allows for a more deeply layered performance from the movie’s star.

That Moretz is excellent in the title role comes as no surprise; she has proven herself a gifted young actress even when saddled with sub-par material, and here she rides an intelligent wave of thoughtful writing that is worthy of her talents.  What makes her performance even more praiseworthy is the way she allows her fellow actors to shine around her.  Cameron serves as our point of access to the story, but it’s our involvement in the experiences of those around her that solidifies our emotional engagement, and Akhavan’s direction lovingly ensures that these other characters – and the actors that portray them — are given full weight and scope on the screen.

Sasha Lane and Forrest Goodluck, as Cameron’s two closest friends at the camp, bring authenticity and wry humor to their roles as they embody the kind of defiant resilience that comes from being a lifelong outsider.  Owen Campbell has a powerful turn as Mark, a camper under excessive pressure to conform, delivering a wrenching biblical recitation that highlights the hypocrisy at the root of faith-based oppression.  Emily Skeggs is simultaneously hilarious and heartbreaking as Erin, desperate to suppress her own obvious sexuality even as she struggles with her attraction to Cameron.  As Reverend Rick, a “successful” camp graduate now turned lead counselor, John Gallagher, Jr. infuses a character that might easily have been a one-note joke with humanity; as his faith is challenged and his confidence is shaken, we cannot help but feel compassion for someone who is himself a victim.

In fact, the only character that fails – appropriately – to elicit audience sympathy is the camp’s overseer, Dr. Lydia Marsh.  In the hands of two-time Tony-winner Jennifer Ehle, she is perhaps the most coldly sanctimonious screen villain since Nurse Ratched.  With a mix of barely-concealed arrogance and soft-spoken cruelty, she represents that most terrifying of antagonists – a “true believer,” utterly convinced that her vision of the world justifies her authoritarianism.  It is a testament to Ehle’s skill that she makes this character utterly believable and burns her into the viewer’s mind with chilling permanence.

“The Miseducation of Cameron Post” is not a flashy piece of cinema; Akhavan, in directing her second feature, has rightly chosen to tell the story straightforwardly, letting the fine acting and writing carry the weight.  Aided by Ashley Conner’s radiant cinematography and a dreamy musical score by Julian Wass, her film transports us to a time and place that lulls us into a sense of tranquility.  This mood belies the turmoil going on in the hearts and minds of its characters; just as in real life, there is suffering in the stillness, and it’s to Akhavan’s credit that she shows it to us without resorting to manipulation from behind the camera.

As for its subject matter, “Cameron Post” is first out of the gate to deal with what appears to be this year’s hot-button issue in LGBTQ-oriented cinema; coming in November is “Boy Erased,” another drama centered on gay conversion therapy that boasts a higher-profile cast and a bigger studio push.  This filmic one-two punch calls timely attention to a barbaric practice that continues to be advocated in some sectors of American society, despite the complete lack of science behind its precepts and the fact that it has been rejected by the American Psychiatric Association as ineffective and potentially harmful.

At one point in “Cameron Post,” its protagonist gets straight to the heart of the argument against conversion therapy when she asks, “How is being programmed to hate who you are not psychological abuse?”  It’s a rhetorical question, of course – but sadly, there are still many people who think they have an answer.

For the rest of us, Akhavan’s quietly powerful film is more than just a celebration of the rebellious queer spirit.  It’s a call to action.