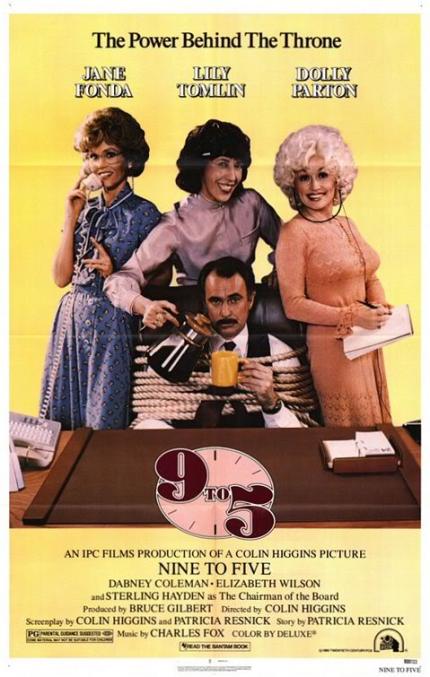 Today’s cinema adventure: Nine to Five, the 1980 comedy caper that became a popular hit on the strength of its pro-feminist sentiment and made country-western singer Dolly Parton into a bona fide movie star by teaming her with established box office draws Jane Fonda and Lily Tomlin.  Following the exploits of three long-suffering office workers whose fantasies of revenge against their chauvinistic and dishonest boss become reality when they believe they have inadvertently poisoned him, director-and-co-writer (with Patricia Resnick) Colin Higgins attempts to mine laughs from the situation as his trio of heroines take advantage of their accidental roles as champions of female empowerment to strike some serious blows against the male-dominated order and implement sweeping workplace reforms in the world of corporate greed in which they are employed.  However, despite the considerable chemistry generated by its three stars and its frequent use of broad slapstick, the film contains few laugh-out-loud moments; most of the comedy seems predictable, falling back on the familiar clichés of countless movies that came before, with the result that the humor feels forced, imposed upon a story with higher aims in order to make it more palatable.  Higgins’ direction, however, does a marvelous job of creating the impression that there is a lot more smart, funny content here than there actually is: a terrific opening montage (truthfully, the film’s best sequence) sets the stage by showing us an entire city’s worth of hassled, stressed-out, put-upon commuters struggling to start yet another demeaning, frustrating day at work; and the use of a seventies-flavored realism in the lighting and cinematography contrasts nicely with the candy-colored trappings imposed upon the grim, utilitarian settings, reinforcing the theme of humanity struggling to assert itself in an oppressive environment.  As for the performances, the three stars are unquestionably delightful together; individually, however, one can’t quite escape the feeling that something is missing.  Fonda seems out of place as the recent divorcee braving the workplace for the first time, wearing her persona of sheltered naïveté like an ill-fitting costume; and Tomlin seems equally uncomfortable in the role of an exceptional woman whose gifts have been long subjugated, exuding a subdued bitchiness that somehow feels more bitter and mean than it might if she truly sank her teeth into it.  That leaves Parton to shine, which she does, stealing every scene with her now-familiar brand of sweet-but-feisty charm; and her refreshing energy is enough to overcome the shortfalls in her co-stars’ efforts and unite the trio as a formidable team; though the ultimate effect is a suggestion that it is their combined strength that gives them their power, it seems unlikely that this was intentional.  As for the remaining cast, Dabney Coleman is so on-target as the ladies’ loathsome boss that the character shaped and limited his subsequent career irrevocably; and veterans Elizabeth Wilson and Sterling Hayden (in one of his final screen appearances) add a touch of distinction to roles which are otherwise just office stereotypes.

Nine to Five became an instant hit upon release and remains a kind of minor classic today despite its numerous flaws; indeed, despite my above criticisms, I find myself holding on to a fond memory of it.  It’s a hard film not to like, one that seems greater than the sum of its parts, inspiring its audience to cheer on its protagonists, and providing an enjoyable- if unremarkable- two hours’ worth of entertainment.  Perhaps its staying power is due to its place in history; it represents a final flourish of seventies liberalism, a celebration of progressive populist values coming just before the Reagan era rolled over the cultural landscape, re-shaping it with trickle-down economics and populating it with voraciously greedy yuppies.  Watching it today, one can’t escape a feeling of bittersweet irony: its wish-fulfillment fantasy resonates with the cause of the underdog, those overworked and underpaid minions of the corporate empire, and seems brimming with the promise that social attitudes were poised to bring about the change depicted within; in fact, the opposite proved to be true- the liberality of the seventies was about to be shelved for a decade of self-aggrandizing greed.  In a way, the film foreshadows this, too: it’s very telling that the three heroines of Nine to Five succeed by beating their oppressor at his own manipulative, dishonest game instead of changing it for the better; and in the final moments we are informed (by the obligatory “where are they now?” subtitles) that two of them will abandon the fight for equality in favor of more traditional forms of feminine success.  Still, though it does less redefining of women’s roles in the workplace than reinforcing of the old stereotype of women as the unseen force behind the scenes, there is something gratifying about watching these three feminine underdogs stick it to the man; and that alone is enough to make Nine to Five seem as infectious and invigorating as its beloved title song. 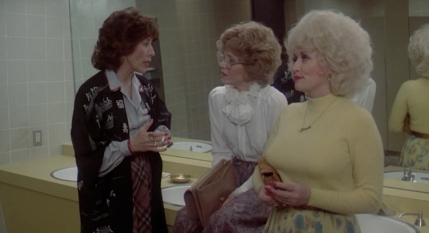 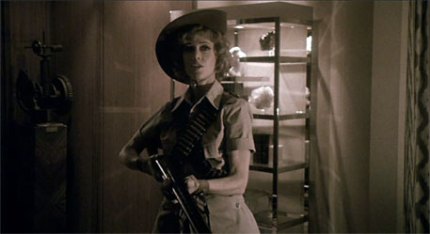 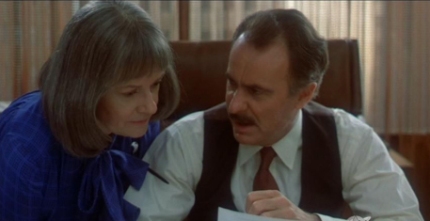 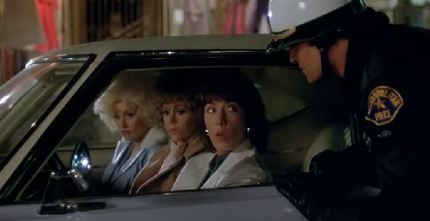 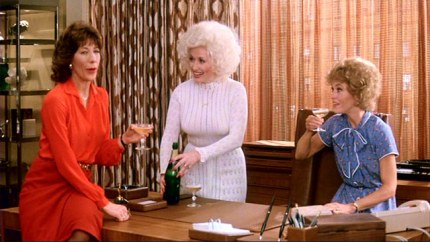