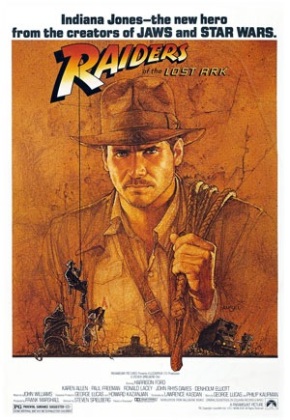 Today’s cinema adventure: Raiders of the Lost Ark, Steven Spielberg’s 1981 action-adventure-fantasy paying homage to- and gently spoofing- the cliffhanger serials of the thirties and forties- but with the benefit of a mega-budget and then-state-of-the-art special effects, courtesy of the powerhouse production provided by George Lucas.  It would be pointless and impossible for me to write anything like a critique of this film- it has passed beyond the realm of review and into cinema legend, and did so almost immediately upon release, becoming an instant classic and creating a brand new archetypal hero in Indiana Jones, the mercenary archaeologist/adventurer at its center.  It spawned a franchise of three (mostly inferior) sequels, countless unworthy imitations, and it made an icon of its star, Harrison Ford, whose roguish charm melds so perfectly into his character that it is literally impossible to imagine anyone else playing it.  And, on a personal level, it became a major touchstone in my young manhood, a cultural phenomenon into which I dove headlong, making any sort of objective viewpoint about the movie completely irrelevant.  What I will say is that, after several years since my last viewing, the movie holds up brilliantly, seeming just as fresh and fun as it was 30 years ago, managing a precarious balancing act between the serious tone necessary to sustain its premise and the sly, unapologetic goofiness that keeps it fun and reminds us, constantly, that it’s only a movie- aided immeasurably by John Williams’ rousing, multi-faceted score, with its now-familiar thematic march, which is surely one of the greatest examples of the use of music to support and drive a film.  In addition, it struck me this time around that this movie represents Spielberg’s direction at its finest, the work of a young artist at the height of his powers, using his skills for the sheer joy of it- completely without pretense or the need to make any kind of statement, merely an expression of his own love of movie magic and an invitation to us all to share it with him.  Sure, you can quibble forever over the myriad gaps in logic and continuity that render the entire story ridiculous- an intentional element drawn from the grade-Z crowd-pleasers that inspired it- or you can point out the numerous visual and stylistic references to classic movies like Treasure of the Sierra Madre or Lawrence of Arabia, from which the director derived his filmmaking vocabulary; but those things don’t matter, in the final analysis.  “Raiders” stands on its own as a great achievement in filmmaking, a timeless tribute to movies themselves and a magic potion to rekindle- even if only for a couple of hours- the adventurous imagination of the fourteen-year-old in us all. 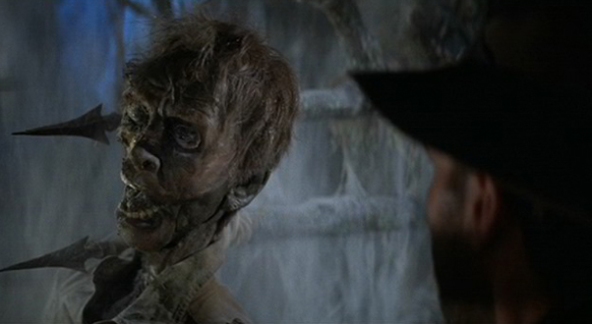